I read this book (in Jan 2018)  – a best seller by Princeton emeritus professor of psychology who won a 2002 noble prize in economics – and surprise surprise his book talked eloquently to jurists as myself. I liked it and I learned many things, I suppose but am unable to repeat much of what was said. So let me keep it short and offer some quotes that I liked:

“[W]e humans constantly fool ourselves by constructing flimsy accounts of the past and believing they are true.” Nassim Taleb in The Black Swan, referred to in (Kahneman 2011, 199)

There is someone called “leading expert on DISGUST” – he is psychologist in Univ of Pennsylvania called Paul Rozin. (Kahneman 2011, 302)

“Bad Is Stronger Than Good: a friendship that may take years to develop can be ruined by a single action.” (Kahneman 2011, 302)

“Animals, including people, fight harder to prevent losses than to achieve gains… Loss aversion is powerful conservative force that favor minimal changes from status quo in the lives of both institutions and individuals. This conservatism helps keep us stable in our neighborhood, our marriage, and our job; it is the gravitational force that holds our life together near the reference point.” (Kahneman 2011, 305)

“A basic rule of fairness is that the exploitation of market power to impose losses on others is unacceptable.” (Kahneman 2011, 306)

“When a revolution is done on weekends, it inevitably fades away.” page unknown.

“Altruistic punishment could well be the glue that hold societies together. However, our brains are not designed to reward generosity as reliably as they punish meanness. Here again, we find marked asymmetry between loses and gains.” (Kahneman 2011, 308)

“A story is about significant events and memorable moments, not about time passing.” (Kahneman 2011, 387)
“The focusing illusion: Nothing in life is as important as you think it is when you are thinking about it.” (Kahneman 2011, 402)

Interesting to note the difference between economists and all others when referring to rationality. (Kahneman 2011, 411) 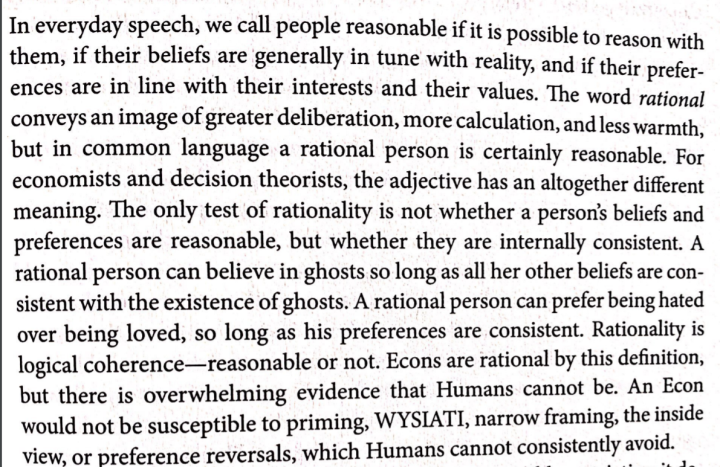 “Presentation greatly matters; if, for example, a potential outcome is framed as a loss, it may have more impact than if presented as a gain.” (Kahneman 2011, 414)

I am still learning; I like to share the little I know about. View all posts by asemkhalil